Located on the western coast, Elmina is rich in gold and ivory resources and was home to thirty or so slave forts concentrated along the coast, becoming the first European slave-trading post in sub-Saharan Africa.

The captivating town of Elmina stretches out on a narrow finger of land between the Atlantic Ocean and Benya Lagoon. Here, the salty air and the charming architecture is a mix of colonial remnants, posubans or shrines and an impressive historical legacy in the shape of St George's Castle.

Built by the Portuguese in 1482, it has since been listed on UNESCO’s World Heritage Site, telling us the story of West Africa’s role in the slave trade.

One of the main purposes of Elmina Castle was to give support to ship captains by providing their vessels with a secure harbour.  In those days, the outposts were heavily armed against assault from the sea.

You can take a tour of the castle, either by yourself or with a knowledgeable guide who will explain where the slaves originally came from and as to their final destinations.

In the castle’s dungeons, gaze through the Door of No Return - a portal in the outer walls through which slaves were lowered into boats and taken to waiting offshore slave ships.

Then later, walk down to the shore and watch the colourful pirogues manned by muscled fishermen in colourful soccer shirts, arrive home to the applause of young men and women standing on the bridge overlooking the lagoon.

Watch the women balance the unloaded fish crates of squid, crabs, and fish to market, on their heads.

Across on the opposite hill,  visit a similarly styled building known as Fort St. Jago, open every day, and was constructed by the Dutch in 1652 to defend the castle from attack. In 1872, the fort and the entire Dutch Gold Coast were ceded to the British, who approved on the original structure.

“Everything went exactly as planned and we came home believing that we had had a good overview of the country, thanks in no small part to the itinerary you mapped out to fill in the blanks after we gave you the three cities that were a must. 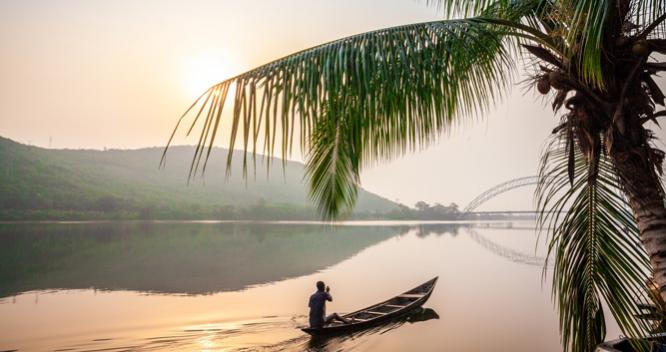