Mali is not usually the country to visit if you want to go on safari,  photograph wild animals, or stroll in natural rain forests. What this nation does have is stunning landscapes, inspired artwork, castellated mosques made entirely of mud, pink sandstone villages shaped out of cliff faces, and undulating desert plains that look like a scene from Lawrence of Arabia.

Once home to several pre-colonial empires, this landlocked, arid West African country is one of the largest on the continent, approximately the size of Texas and California combined, and is old enough to have rock paintings dating back to a time when the Sahara was a flourishing paradise.

In the North of Mali, you will witness the unending desert with dunes, harsh mountain ranges and withered river beds. Baobabs and acacias dominate the open grasslands between Ségou and Mopti. The South characterised by lush agricultural land.

Mali has an ancient, rich culture and a welcoming, proud population, who share and make you familiar with their habits. There is considerable diversity in Mali. Bambara, Fulani, Touareg, Bozo, Malinké, Sonrhai, Dogon, Bobo and other ethnic groups add their unique aspects to the cultural landscape. 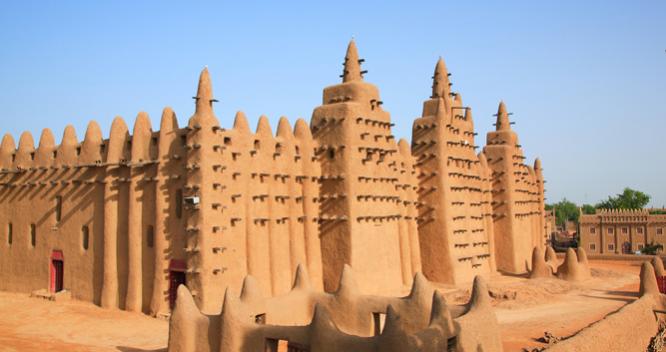