Exploring Santo is easy via the tar sealed East Coast Road that runs from Luganville, on the islands south-east corner, to Port Orly village on the northern tip.

If you are up for an adventure, get off the beaten track and explore south Santo. Discover secret waterfalls, treks through dense bush, traditional Santo village life and black sandy beaches. The west coast of Santo characterized by high mountains and thick bushland, the west coast home to Vanuatu’s highest peak, Mt. Tabwemasana.

As there are no roads on this side of the Island, the people who live there maintain a predominately traditional way of life boasting the richness and continuity of Vanuatu’s customs and traditions.

On Santo relax or picnic on white sandy beaches, dive around the wreck of the SS President Coolidge, learn about the culture in a Kastom village, catch marlin, wahoo, Spanish mackerel. Or kayak from Island to island on clear blue water, and swim in jewel blue holes.

Aore Island Resort is a stunning Pacific Island retreat with an authentic and welcoming culture nestled in a unique natural paradise. Experience the raw luxury of our private bungalows and indulge in...

Barrier Beach Resort promises a luxurious, relaxed atmosphere to use as your base for exploring the many delights that Santo has to offer. Spacious fares look out over the sea, where offshore islands...

Set in a beautiful waterfront location, turtle bay lodge is situated halfway to the famous Champagne Beach and a leisurely kayak from both the Riri and Matevulu Blue Holes it is the ideal place to...

Thank you so much for the wonderful holiday you arranged for the eight of us. Cambodia and Vietnam will be on our itinerary again. Bravo! Bravo! 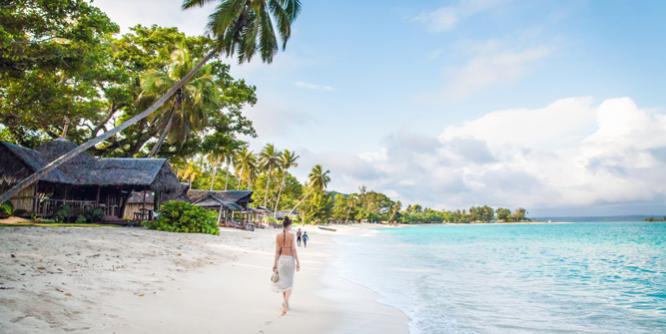